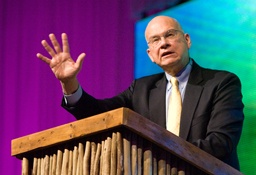 Quotes from Tim Keller’s article on churches moving into cities…

An urban church, which has people from many cultures, is required to be extremely patient about accusations of cultural insensitivity and should expect to be accused of such. Pastors of urban churches need to accept that they can never fully solve complaints of cultural insensitivity, but that they can learn from criticisms. Churches in cities also need to show people how their faith relates to their work because jobs are a much bigger part of urban dwellers’ life, Keller said.

“I had only known how to disciple people by bringing them out of the work world and into my church world,” the New York pastor shared. “But if you are in an urban church you can’t do that. You have to help people apply their faith to their work.”

Urban churches also need to expect disorganization and changes; be intensely evangelistic but at the same time famous for its concern for justice; be committed to the arts; and cooperate with other denominations and faith, he said.